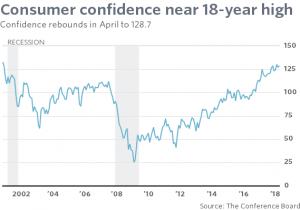 Americans are pretty satisfied about the U.S. economy, job prospects and their own finances. Consumer confidence is near an 18-year high.

The numbers: Consumers confidence rebounded slightly in April with a small gain that put the index back near an 18-year high, suggesting the U.S. economy remains on sound footing despite fresh worries about trade tensions.

The consumer confidence index climbed to 128.7 in April from 127 in March, the Conference Board said Tuesday. Two months ago, the index hit the highest level since the end of 2000.

Americans were more optimistic about their own finances and they think jobs are easy to find, the survey showed.

Big picture: The U.S. economy appears to be speeding up after a slowdown at the start of the year, repeating a pattern that goes back almost two decades. Millions of Americans have found jobs, the unemployment rate is at a 17-year low and businesses are investing more.

Economists polled by MarketWatch predict the U.S. will grow a healthy 3.2% in the second quarter that stretches from April to June.

What are they saying?: “Overall, confidence levels remain strong and suggest that the economy will continue expanding at a solid pace in the months ahead,” said Lynn Franco, director of economic indicators at board.