By CHRIS SPARGO FOR DAILYMAIL.COM

Josh Kushner and girlfriend Karlie Kloss managed to get the VIP treatment during their visit to Jordan this week.

Jared’s kid brother and his supermodel squeeze were photographed with friends including Mikey Hess, singer Ellie Goulding, and documentary filmmaker Bryn Mosser exploring the Wadi Rum Desert on Wednesday, where they rode camels, watched a battle reenactment and rode ATVs through the area.

Two group photos posted to social media show a man who looks to be Prince Hussein, 23, posing with the group.

The man is off the same height and build as Prince Hussein, but a lion emoji has been placed over his face in an attempt to hide his identity.

Prince Hussein then posted a photo of himself wearing the same outfit as the mystery man to his Instagram account on Thursday, writing: ‘During a camping trip in Wadi Rum, one of my favorite locations in #OurJordan.’

Scroll down for video 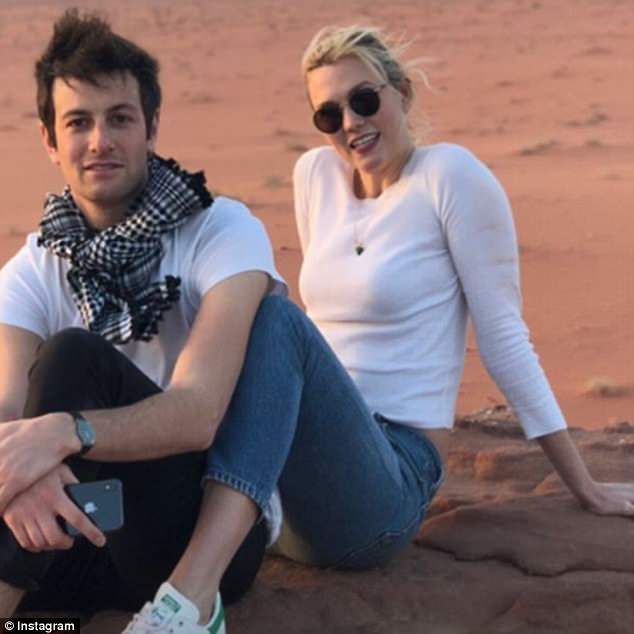 Desert hearts: Joshua Kushner and his girlfriend Karlie Kloss are vacationing in the Middle East and spent Wednesday touring the Wadi Rum Dessert with friends (above)

Karlie Kloss and her beau are exploring Jordan and of course the supermodel will wokr a chic low-key look even for the desert. A classic white top and jeans and some Stan Smith kicks, of course!

You can’t beat a classic white trainer and they don’t come more iconic than Adidas’s Stan Smith’s. Make like Karlie and team yours with cropped jeans and an white knit for an off-duty look, or pair with a leather mini skirt and a slogan tee if you’re after something dressier.

Click the link to your right to snap up a pair of Karlie’s trainers now for just $75! Alternatively, click through our carousel below to shop lookalikes. From Kenneth Cole to Asos, you can’t go wrong with our edit… 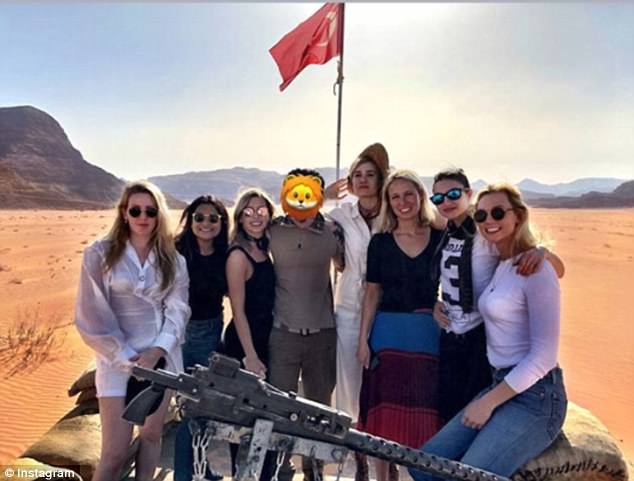 Prince squad: The tour appeared to be led by a very famous guide, with a man believed to be Crown Prince Hussein of Jordan (above with lion emoji)  joining the group, which included Ellie Goulding (left) 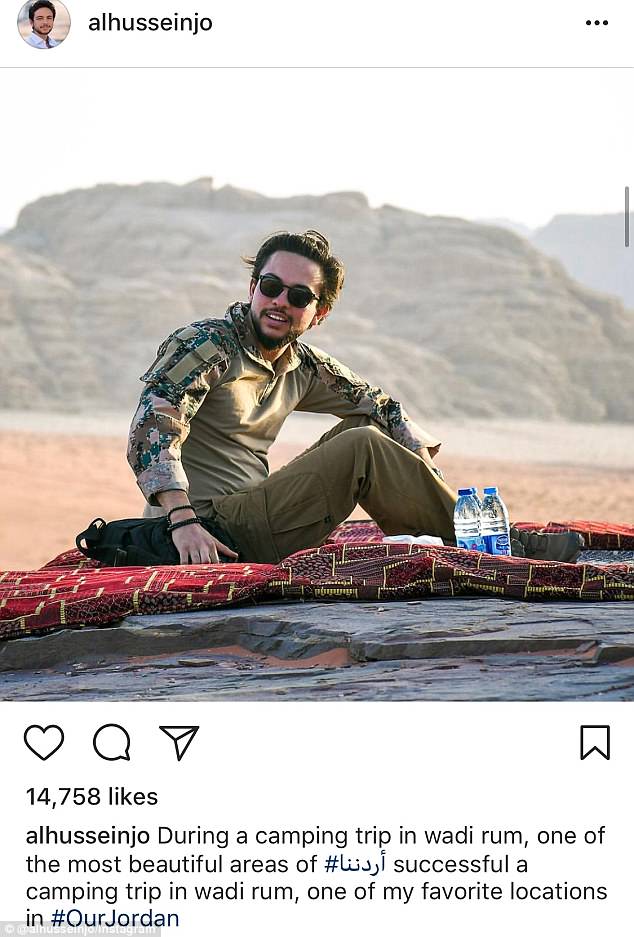 Familiar face: Prince Hussein shared a photo of himself at Wadi Rum on Thursday, writing: ‘During a camping trip in Wadi Rum, one of my favorite locations in #OurJordan’ (above) 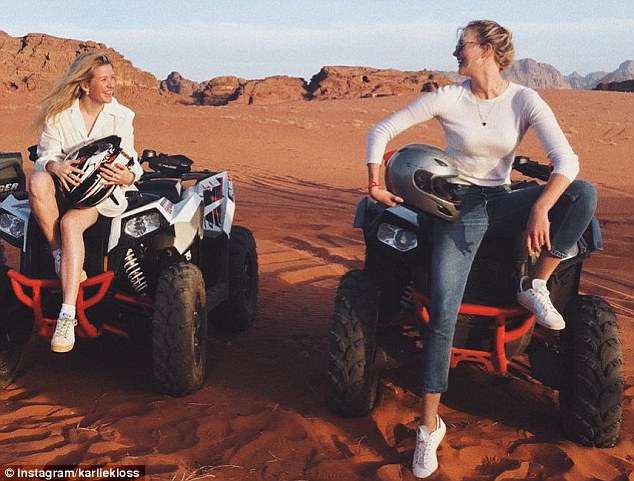 Anything can happen: Goulding and Kloss were seen laughing as they posed on ATVs at ‘golden hour’ (above) 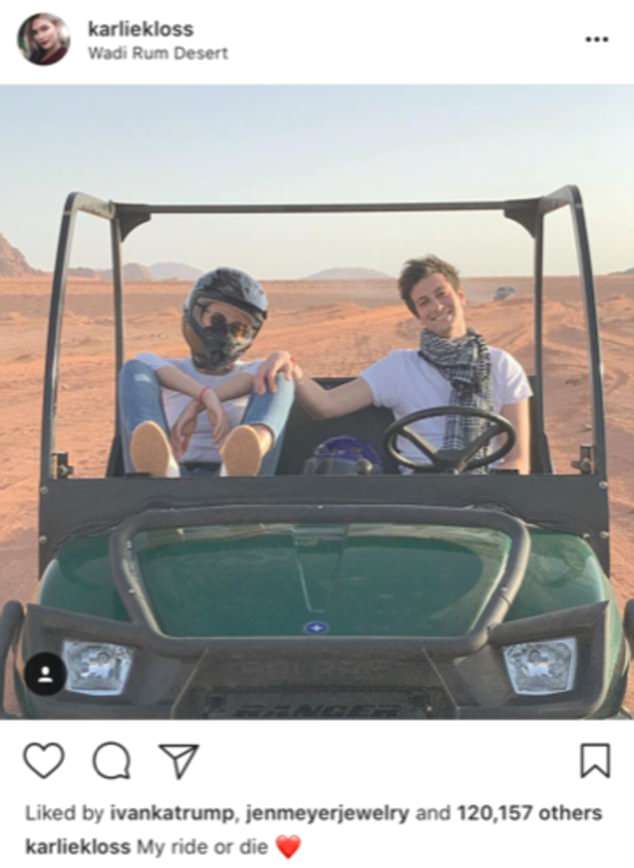 Klossie and Joshie: In one image, Kloss and Kushner sit in an ATV with the model writing: ‘My ride or die’ (above)

This trip comes just months after demonstrations took place around the country calling on King Abdullah to shutter the United States embassy in the wake of President Trump’s decision to recognize Jerusalem as the capital of Israel.

Prince Hussein is the oldest son of King Abdullah, a man who did Kushner’s older brother a great service last year at a time when he needed it most.

In November, King Abdullah was photographed meeting with the struggling White House adviser outside Jordan’s embassy in Washington DC, just as chief-of-staff John Kelly was reported to be questioning what Jared’s role was in the administration.

Kloss and Kushner appear to have crossed the border into Jordan late Tuesday or early Wednesday.

Prior to that the two had been in Israel, where Kloss posted a photo of herself floating in the Dead Sea over the weekend.

Once in Jordan they could been seen riding through the Wadi Rum Dessert on a train.

This was not just any train though, but rather one of the first in the world when it was built back in the 1800s, and travels on thin tracks laid in the sand.

On the train, the group was even able to see a reenactment from the Arab Revolt, during which the Bedouin tribes in the region managed to overthrow the Ottoman Empire.

That two-year conflict was depicted in part in the film Lawrence of Arabia. 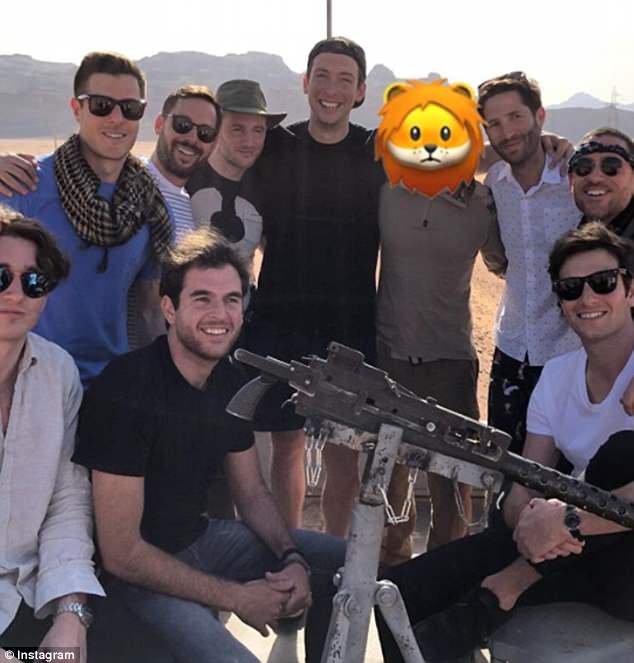 The lion prince: The men on the trip pose with the same mystery man (above)

Best buds: Kushner (left) and his best friend Hess (right) on the trip 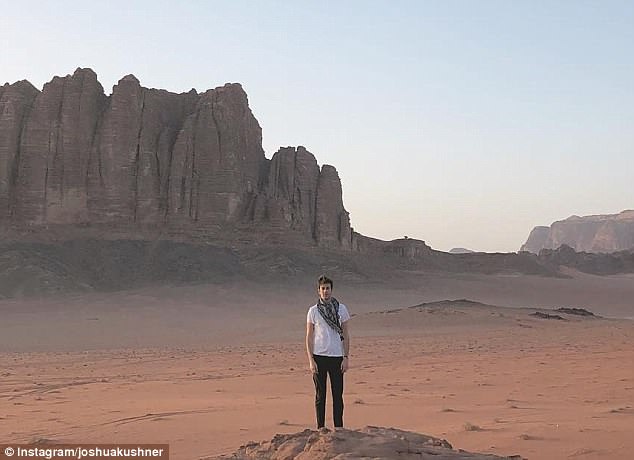 Great wide open: Kushner crossed over the border from Israel into Jordan on Tuesday or Wednesday 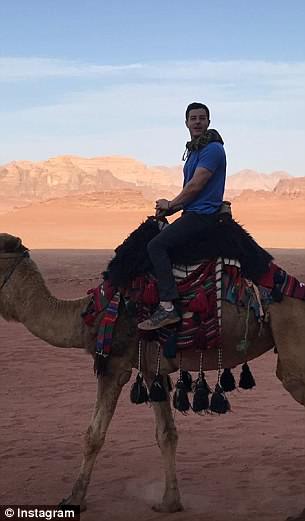 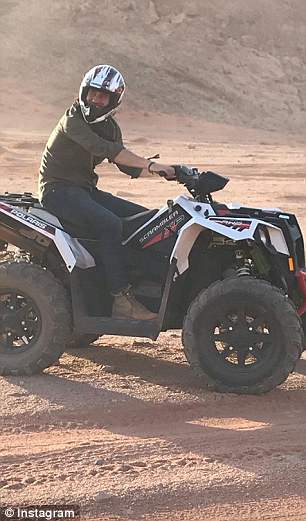 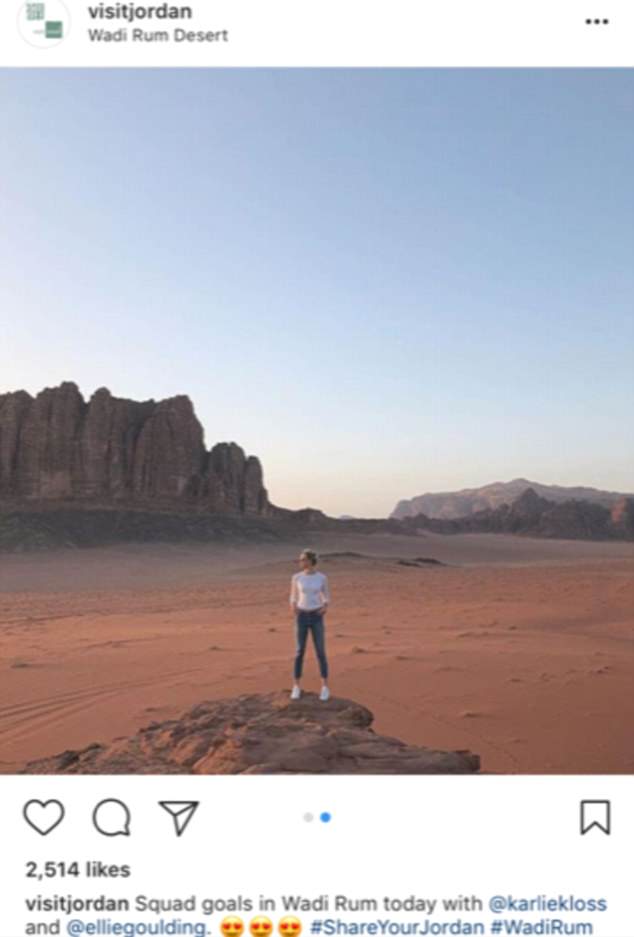 #AD?: Kloss’ photos and image were used in posts shared by the official tourism board for Jordan (above)

Kloss and Kushner were seen with a person believed to be Prince Hussein for the first time on Wednesday, though his identity was kept under wraps in photos with a lion had being used to cover his face.

Photos posted by other members of the group to Instagram showed the friends roaming trough the desert on camels and posing with armed guards and their guides.

They friends later drove ATVs around the dessert before all posing for photos with the mystery man believed to be Prince Hussein.

Kushner and Kloss both posted images of the trip to their Instagram accounts, as did their fellow travelers, documentary filmmaker Bryn Mooser and his wife Nora Kirkpatrick.

In one image, Kloss and Kushner sit in an ATV with the model writing: ‘My ride or die.’

Another shows Kloss and Goulding sitting atop ATVs with the caption: ‘Golden hour.’ 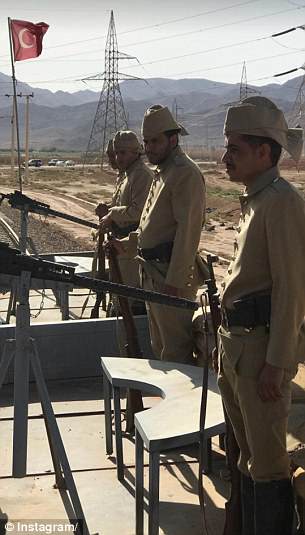 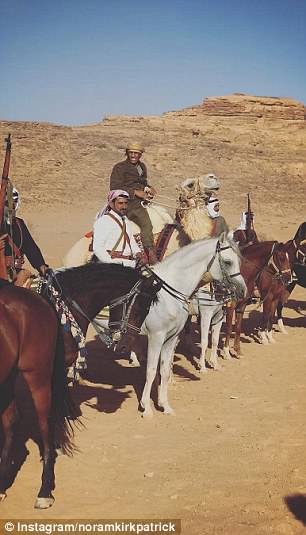 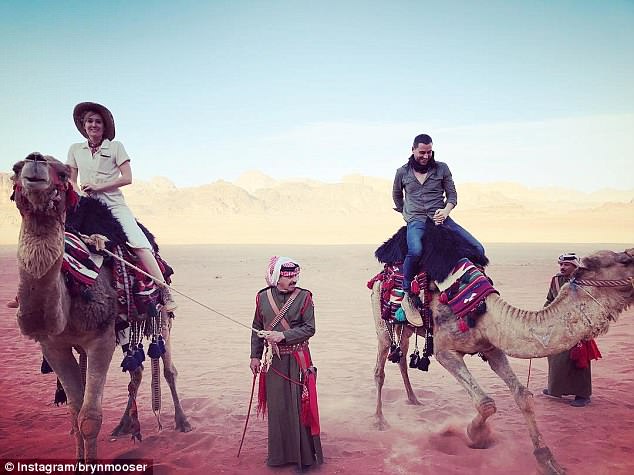 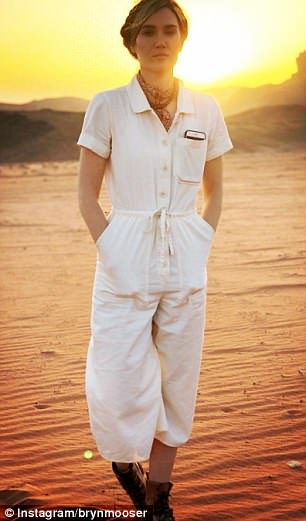 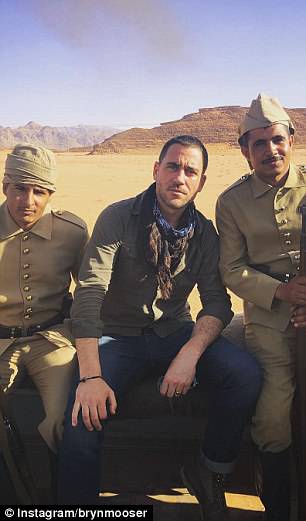 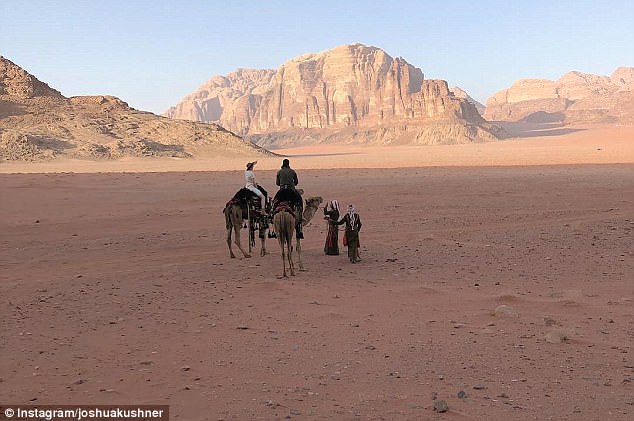 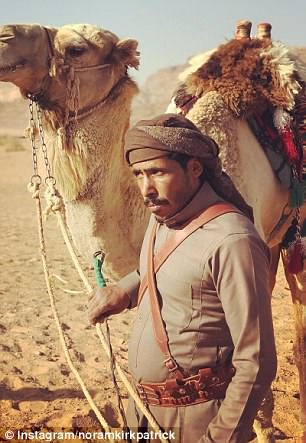 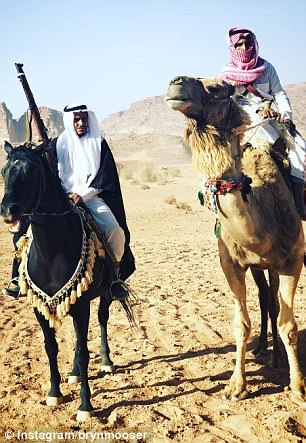 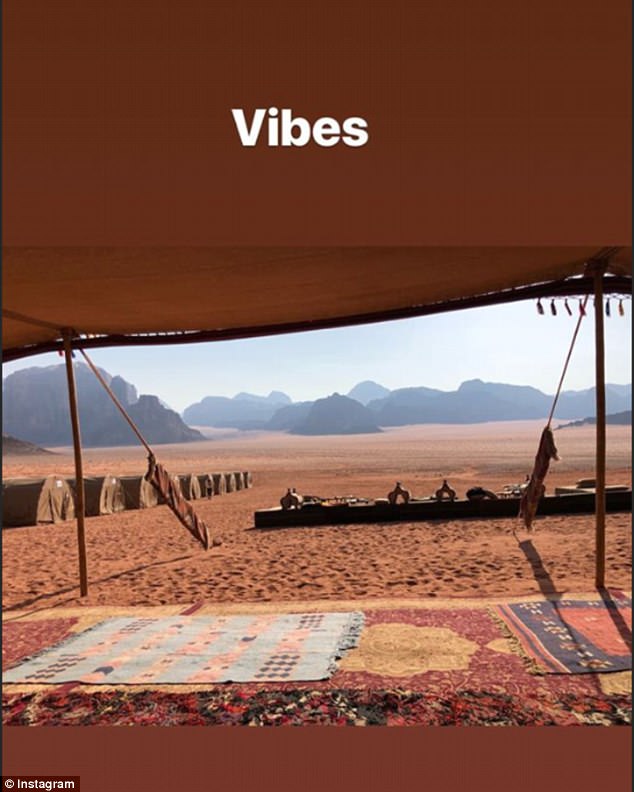 The image of Kloss and Goulding was later posted by Visit Jordan, the country’s official tourism board to their social media accounts.

‘Squad goals in Wadi Rum today with @KarlieKloss and @EllieGoulding,’ read the caption.

Kloss and a number of other guests on the trip also started following Prince Hussein’s private Instagram account.

A spokesperson for the board told DailyMail.com that no one at the organization planned Kloss’ trip but did not respond when asked if she had given permission for her photo to be used on social media or if the model was paid a fee.

DailyMail.com also reached out to multiple reps for Kloss multiple times for comment, but did not receive any response. Multiple reps for Goulding also declined to respond to request for comment as did the spokesperson for Jordan’s embassy in the United States.

The United States currently has no ambassador to Jordan and calls by DailyMail.com to the embassy in Amman were never answered. 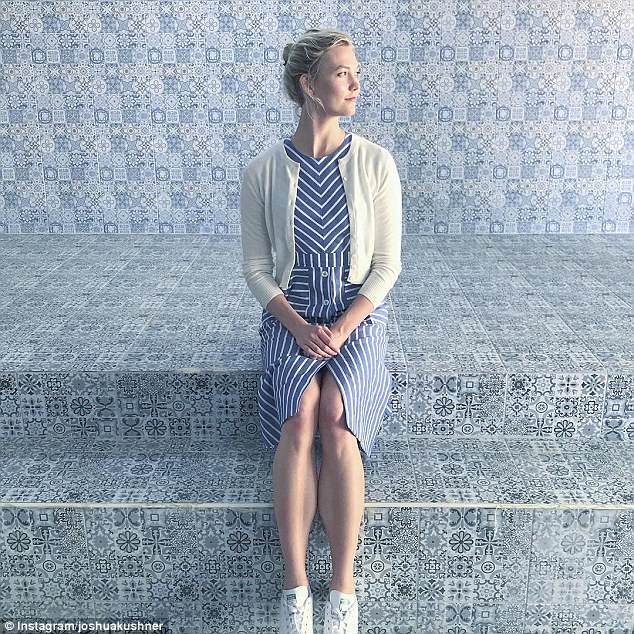 Holy Land: Prior to Jordan, Kloss and Kushner had been in Israel over the weekend 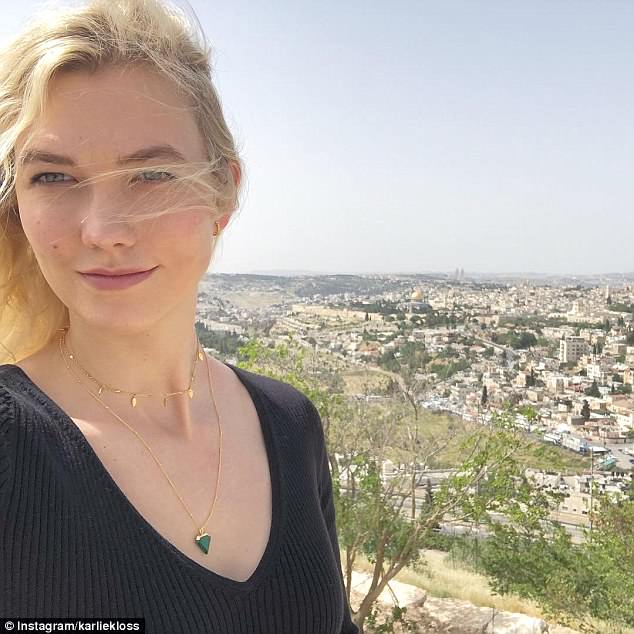 In the distance: Kloss poses near the site of the Dome of the Rock, a vaunted landmark for many in Jordan 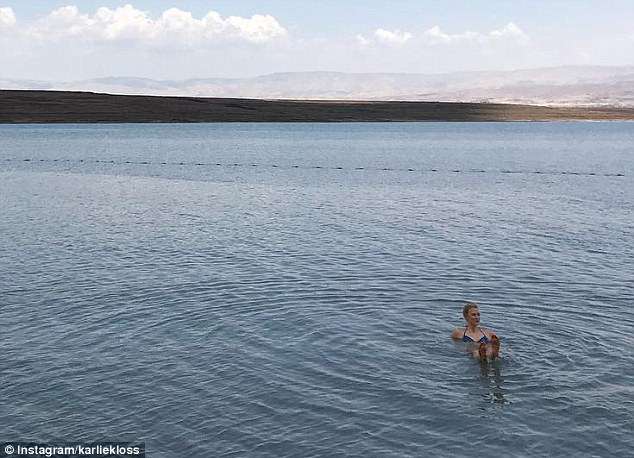 Floating around: Kloss posted a photo of herself floating in the Dead Sea over the weekend 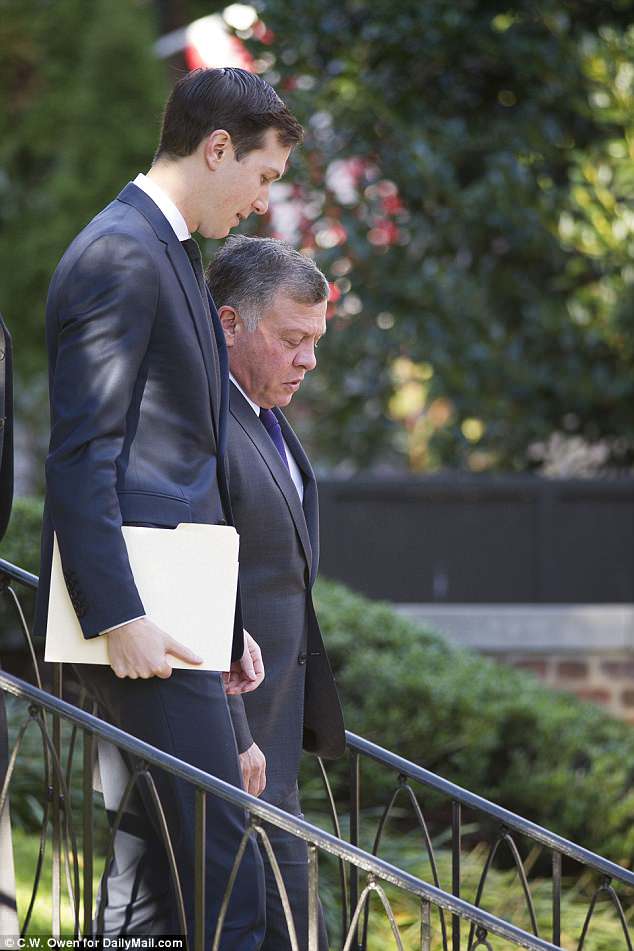 Meeting time: Kushner managed to score a much needed ,meeting with King Abdullah back in November (pair above) 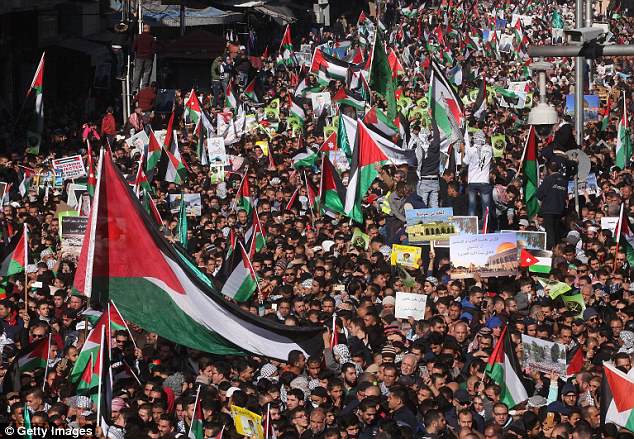 Unrest: People stage a protest against U.S. President Donald Trump’s announcement to recognize Jerusalem as the capital of Israel in December in Amman, Jordan’s capital (above)

This all comes one month before Kushner is due in Israel for the opening of the new US embassy in Jerusalem.

President Trump’s transition team revealed soon after it was announced that Jared would be joining the administration as an adviser that his main role in the White House would be relations in the Middle East.

His ability to manage that role has been called into question countless times, and by November of last year reports had emerged stating that Jared was little more than a figurehead with no real responsibilities.

That narrative quickly changed however when he was photographed by DailyMail.com meeting with King Abdullah in DC amidst controversy over the United States possibly recognizing Jerusalem as the capital of Israel.

Jared was seen going into the residence where King Abdullah was staying and later leaving with him, with the two men getting into the same car and driving off together.

King Abdullah had both personal and political reasons for objecting to President Trump’s decision, which he announced just days after her and Queen Rania visited Washington DC.

The reigning royal is a member of the Hashemite monarchy, whose namesake is Hashim ibn Abd Manaf,  the great-grandfather of the Prophet Mohammed.

He therefore has a vested interest in a number of landmarks in Jeruselem, particularly the Dome of the Rock, where Mohammed is believed to have descended to heaven alongside the angel Gabriel according to scholars.

The Dome of the Rock, which is referred to as Temple Mount by members of the Jewish faith, is actually mainatined by the Ministry of Awqaf in Amaan, Jordan’s capital.

That is the result of a 1994 peace treaty between Israel and Jordan that was signed by King Abdullah’s father, King Hussein.

President Trump’s move back in December has led to many in the Arab world urging Jordan to end that treaty.

Jordan is also home to over two million refugees from Palestine, whose ongoing conflict with Israel is the source of much of the unrest in the region.

King Abdullah supports a two-state solution to the conflict between Israel and Palestine, and has repeatedly called for the creation of a Palestinian capital in east Jerusalem.

At the same time he and his country are also dependent on the United States, who provide a great deal of the aid needed by Jordan to secure the country’s border with Syria.

President Trump fired the US ambassador to Jordan, Alice Wells, back in August.

That move was carried out at the behest of King Abdullah it was reported at the time, who had a distrust for the Obama-appointed Wells stemming from the previous administration’s 2015 nuclear deal with Iran.

Since that time there has been no US ambassador in Amaan, and in December there were demonstrations and calls to close the embassy by members of the country in response to the Jerusalem announcement.