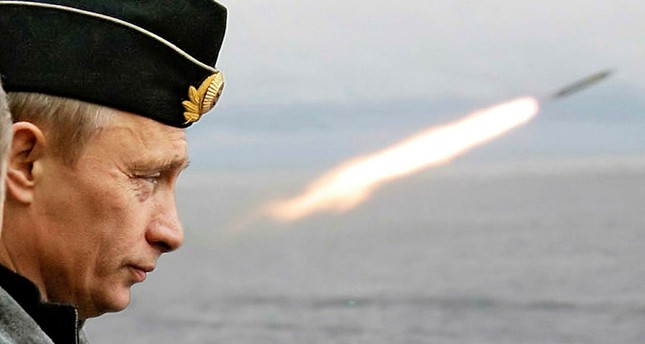 Putin watches the launch of a missile during naval exercises in Russia’s Arctic North on board the nuclear missile cruiser Pyotr Veliky (Peter the Great) in this August 17, 2005 file photo.

Experts fear that if detonated underwater, the drone, which is allegedly capable of carrying a nuclear warhead of 50 to 100 megatons could create tsunami waves reaching more than 100 meters, leaving coastal areas and enemy ports uninhabitable for up to a century.

Speaking to Business Insider, physicist and nuclear-weapons researcher Rex Richardson said: “A well-placed nuclear weapon of yield in the range 20 megatons to 50 megatons near a seacoast could certainly couple enough energy to equal the 2011 tsunami and perhaps much more.”

Richardson also warned that the impact of the nuclear explosion would get worse as time goes on as the radioactive fallout rains on Earth, and “Los Angeles or San Diego would be particularly vulnerable.”

However, not all experts are on the same page.

Although Greg Spriggs, a nuclear-weapons physicist, accepted the possibility of a tsunami occurring, he called it “a stupid waste of a perfectly good nuclear weapon.”

The blast from the weapon would spread in all directions, and hence “would be wasted going back out to sea,” he told the Business Insider.

He also said he doubted that the nuclear warhead carried by the drone would be able to generate the same kind of energy as a naturally-occurring tsunami. For comparison, the Tohoku earthquake and subsequent tsunami in Japan in 2011 released about 9.3 million megatons of TNT energy, millions of times more powerful than the bomb dropped on Hiroshima in 1945, which was equivalent to 15,000 tons of TNT.

The ‘submarine’ drone, believed to be the Status-6 system – known more commonly as ‘Putin’s doomsday machine’ – was announced by Russian President Vladimir Putin in his annual state-of-the-nation speech in Moscow in early March.

The Status-6 is reported to have a range of up to 6,200 miles leaving the U.S. and Europe within its striking distance. Putin had boasted that the new drone’s operational depth and high speed would make it ‘immune’ to enemy intercept.

In his address, Putin also revealed a nuclear-powered cruise missile and a new hypersonic missile that had no equivalent elsewhere in the world.

The new intercontinental hypersonic missile called Avangard will be able to fly to targets at a speed 20 times the speed of sound and strike “like a meteorite, like a fireball,” the Russian leader had said.

He said the creation of the new weapons rendered NATO’s U.S.-led missile defense “useless,” and would bring an effective end to Western efforts to stymie Russia’s development.